Fine artist Harriett Rex Smith continued to paint in her Greensprings studio until a few weeks before her death. In December 2016 she created the last of her signature very large astronomy watercolors inspired by Hubble space photography. Her meticulously rendered acrylics on canvas acquired bravura brushwork in her last year, and she frequently painted on heavily textured board.

Harriett Rex Smith trained as a fine artist during WWII and returned to Notre Dame University in the 1970’s to earn her Master of Fine Arts degree. Her reputation was first established in the Chicago area, and she moved to Ashland, Oregon in 1978. Inspired by Southern Oregon’s verdant mountains, she painted plein-air landscapes and traveled to the Grand Canyon, Zion National Park and coastal California for more subject matter.

Before her death, Harriett arranged to donate her legacy works from the Yin & Yang and Rex Astronomy Series to the Schneider Museum of Southern Oregon University, to raise funds for scholarships.

See the tribute published by the Ashland Tidings. 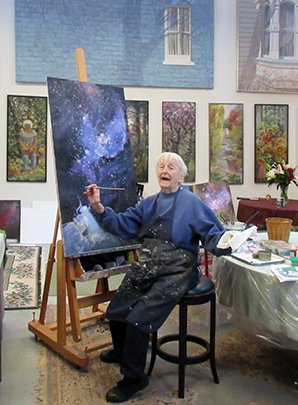